Assignment three – Colour communication
Aims
Your aims in this assignment should be to:
•employ a process of evaluation and selection of your own work
•demonstrate effective design, layout and presentation skills in the visual communication and presentation of your work.
Brief
This assignment asks you to use the work from Projects 1 and 2 to develop and create a beautifully presented colour resource book.
Quality of outcome
– content, application of knowledge, presentation of work in a
coherent manner, discernment, conceptualisation of thoughts, communication of ideas 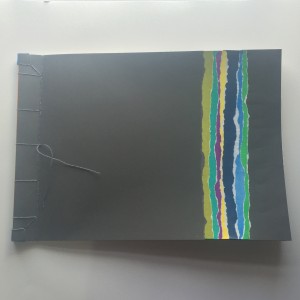 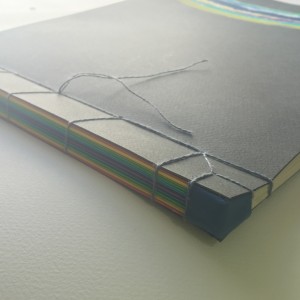 I had a look at the assessment criteria in the back of the course notes for quality of outcome. I will do this at the start of the assignment next time.
Focussing on the positives, the presentation of my work is coherent  and I think professional. My  book looks great! The binding is carefully and precisely crafted, I worked through some different ideas and chose a stab binding method. This displays my work clearly in an interesting way. To avoid cluttering the pages with little bits of stuck on text I have a fold out contents page. The contents page has a photo reference with a summary of each exercise that is clearly visible as the pages are turned. The cover is attractive but simple, I used ripped paper in a stripe pattern, choosing unusual colours that work together in an interesting way. The papers were hand coloured using Inktense blocks to get bright, clean, flat colour. I used the same papers to wrap each page edge before I bound them to give some extra thickness to the spine, I think that this added strength and aids the opening of the pages. The book is stitched but would very easily come apart if I want to add more pages.
The contrast between the spine of the book and the stripe pattern on the front is quite interesting, I used exactly the same coloured pages but the taking away of the hot colours makes a huge difference to the mood. They do not sit together well at all.
To be honest there are not many of the exercises that I left out of the book. So I’m not sure how discerning I can consider myself to be. It felt incomplete without all the tasks in order, so my judgement was to use all the exercises, I very carefully considered page layouts though.  It is possible that I kept the pages too simple in some cases, they are certainly not over cluttered! My thought processes, tests and design work is in my sketchbook. The book does not perhaps get across my learning during the module, or get across a good sense of colour ideas. I did gain a deeper understanding of the use of colour, hopefully this will be reflected in future assignments.  I didn’t thoroughly explore the potential for expanding on the exercises, mainly due to time restraints. I had a fantastic week long break with only a couple of half days of chores and it was amazing to be able to really crack on and concentrate for extended periods. What a treat! Things that I considered including were, making yarn wraps for the gouache samples of collages, and colour chips for the collages. I could add these later. I have a spare page at the back just in case. I also have started gathering a broader range of textures including fabric strips for my yarn wraps.

Cole and son wall coverings don’t inspire me on the whole, the colour palate could be described as subtle or sophisticated, I find it very bland. I was quite excited by their range of Natural wall coverings though, using sisal ,jute and woven paper in beautiful natural tones. I realise this is a little contradictory, I like the natural colours when they are natural, but not when they are interpretations of the subtle natural tones.

This print is from the Fornasetti range, I’m not a fan of pinks at all but really like the clash with the red against the very neutral background.

The contemporary Restyled range also uses very safe neutral shades, but a couple of designs caught my eye, Wood and Pears uses some interesting simple marks to represent the bark.

Summer lily is quite surreal! 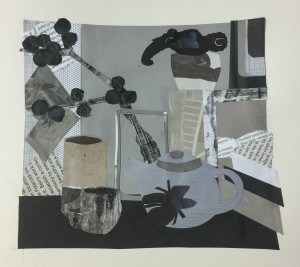 I have used black and white and also shades of cool and warm grey,. Some plain papers and some printed. I think I achieved quite a good balance. I kept pretty much the same format for the collage, of identifiable shapes. I wanted to really concentrate on achieving the same balance of light, shade and tone. I did simplify the composition slightly  to make it less busy, so easier to read. I kept this format with the three studies for part 2. I have looked at a wide range of collage types and enjoyed the process, but didn’t feel that it was appropriate to what I wanted to achieve to experiment with different forms here. 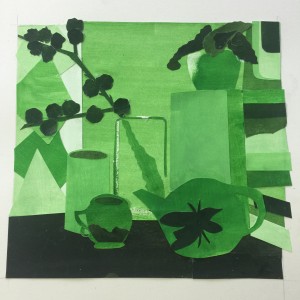 I did a “core sample ” to identfy the tones of the composition and this translated easily into the next study , using tones of one shade. I chose green, and did a few experiments in my sketchbook to decide what to choose. I painted some samples using sap green, viridian green with black and white added. I also looked at the mixes of cool and warm yellow with blue colourways. I took a monochrome photo and identified sap green as showing most contrast between tints and shades. I painted a load of swatches then worked my way through the light to dark list of collage components to work out which swatches to use. I took a monochrome photo of the completed collage and was really pleased with the level of accuracy that I achieved. 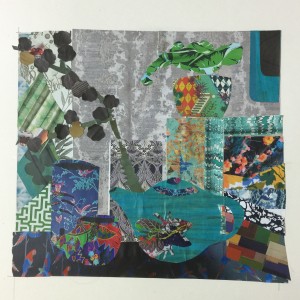 I spent a very pleasant time flicking through back issues of interior magazines for research point 2 and found loads of wallpaper and fabric designs. For the multicoloured study I decided to only use theses images, still with a focus on light and dark.Considering the riot of colour and patterns used i was really pleased that the collage still reads as identifiable objects. There is a swatch of each in my sketchbook with the designer identified for reference.

I had issues with type of glue to use, I tried a cellulose paste, glue stick, and settled on watered down PVA, all of my collages are slightly buckled, the first one I did on paper and it was very wobbly when dry so I swapped to a card base.

I have explored the wide range of ways of creating a collage. I created a Pinterest page  to refer to,

I discovered that the history of collage seems to go back to early works by Picasso and Braque at the begining of the 20th century, a nice little history can be found here . Collage has been used extensively by renowned artists such as Matisse as a way of image making , it is currently a really popular contemporary art form in its own right. I feel that quilting and mosaic probably fall under the collage umbrella. The Chambers dictionary definition is

collage noun 1 a design or picture made up of pieces of paper, cloth, photographs, etc glued onto a background surface. 2 the art of producing such works. collagist noun.
ETYMOLOGY: 20c: French, meaning ‘pasting’ or ‘gluing’.

For the first collage exercise I needed to identify an area of clutter. One single area. Hilarious!!!! This was incredibly challenging. Most of our house is in complete chaos due to lots of renovation work. There are some really interesting juxtaposition of objects, but really, mostly just too much stuff, a tangle on the eyes and bewildering for the eyes. I took some photos around the house, trying to be aware of composition. Eventually I decided my desk area made most sense so i took photos from lots of  different angles and got scared of the number of elements so I tidied up!!! outrageous cheater! the photos of the clearer cluttered space were completely contrived , so I worked on something else and let things quietly take their place. 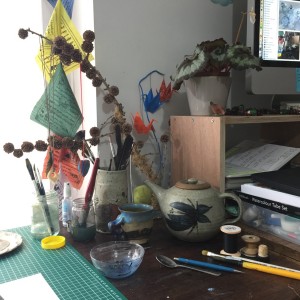 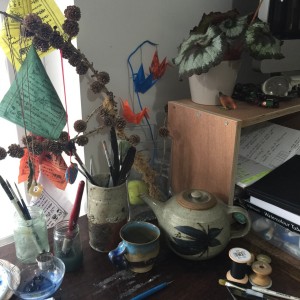 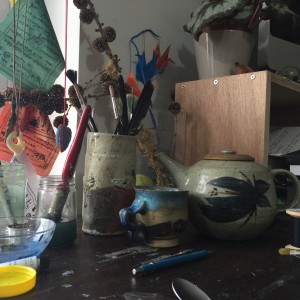 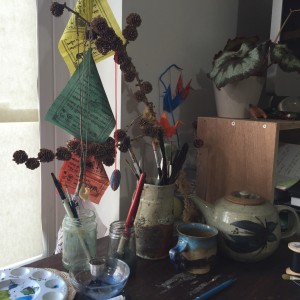 I still moved some bits out but this is my working composition. 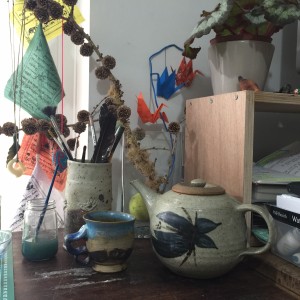 I used Adobe colour CC to identify colours using programme settings and custom mode. The first collage was to be simple colours, using the programme helped to isolate flat colours from the shadows and highlights.

I drew the main outlines on a black and white printout of my photo, used a window as a lightbox to make an outline drawing and then made a few copies to use as templates. I felt quite clever. 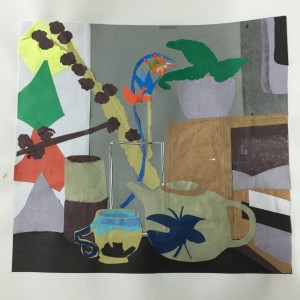 I kept the collage quite simple and was really pleased with the outcome.

I don”t think that there are any.

I cannot abide generalisations, (they are all manner of dangerous) I do not understand ‘usual’, what is  usual? Usual implies that there are rigid rules and clearly these are for breaking. Could it be that usual is safe and dull?

On reflection some of the designers of fabric and wall coverings that I looked at for research point 2 used some very non challenging colour palettes, perhaps these are a good business model, catering for the masses to sell more stuff. The products that used exciting combinations had exotic names that suggest the unusual. So is usual non challenging?

I’m not suggesting that everything should be wildly clashing. There is some really interesting studies of colour combinations in  Colour – a workshop for artists and designers by David Horning. colour combinations can be; harmonious, unified, contrasting, analogous, symbolic, complimentary, monochromatic, triadic….

While looking at how artists and designers use colour I was drawn to the works of David Hockney. I walked past a shop in town that had a print of “Spring in the woods” in the window. Hockney had observed the tree trunks as purple, and I know from walking in the woods at dusk that this can be true. “Usually” trees are described as brown. I know that generally they are not.

For this piece I drew a 10×10 grid over an inked in photocopy so that I could count the squares taken by each colour and get a percentage for each colour. I used the percentages to make a stripe design of the correct proportions. 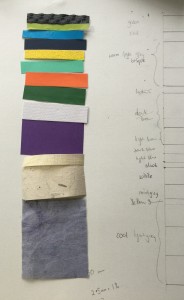 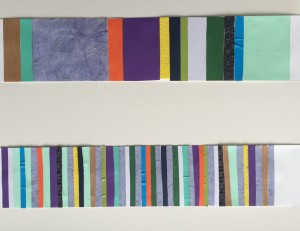 As if the first wasn’t complex – it took long enough! I decided to use the same format but work with colours taken from images in magazines, how pleased I felt that I have a huge stash of them… 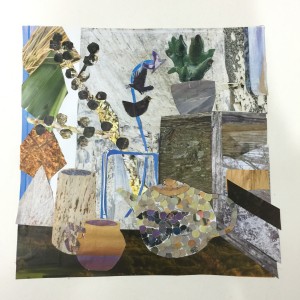 I got totally absorbed in matching colours and quite quickly got caught up in the idea of the image in the magazines being related to the object it portrayed. So the peace flags use grasses to represent cloth fibres, ceramics came from sand and rock, origami cranes were inspired by birds etc. The tea pot is made of hole punched paper dots, I didn’t have a large suitable swatch to use and thought it would be interesting to take a pointillist approach. The process was more fiddly than I imagined , so the shading isn’t as I planned. It sits quite well with the rest of the collage though.

The task is to use watercolours to create stripe patterns based on the observation of a collection of glass vessels. 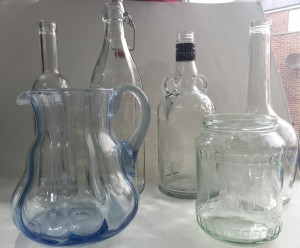 Perhaps because of the lovely qualities of light in the glass, I found this task beautifully relaxing, like a genie I entered the watery world and searched for comparisons. Using a white paper back ground and base meant the for the first 3 examples I observed the subtleties of green and blue glass tints and how they changed due to thickness of glass or overlaps.Strip of stripes 1 and 2 – observing the obvious tones and aiming to record intensity and proportion.

Strip 3 looking even closer at the laying down bottle(whisky!) little reflections of the city scape are found hiding in the base.
I changed my perspective for strip 4 and 5 to investigate the reflected (refracted?) colours further. 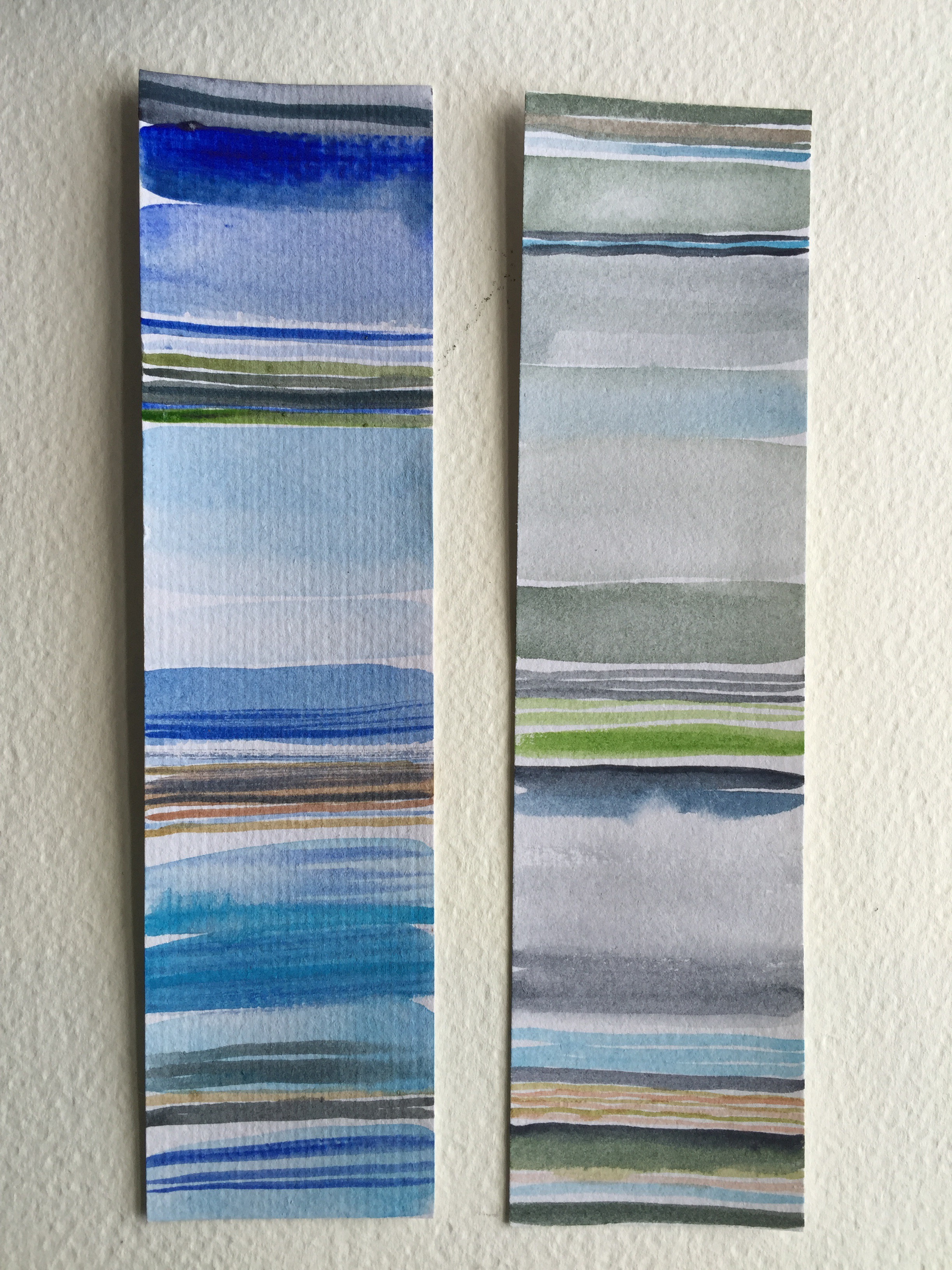